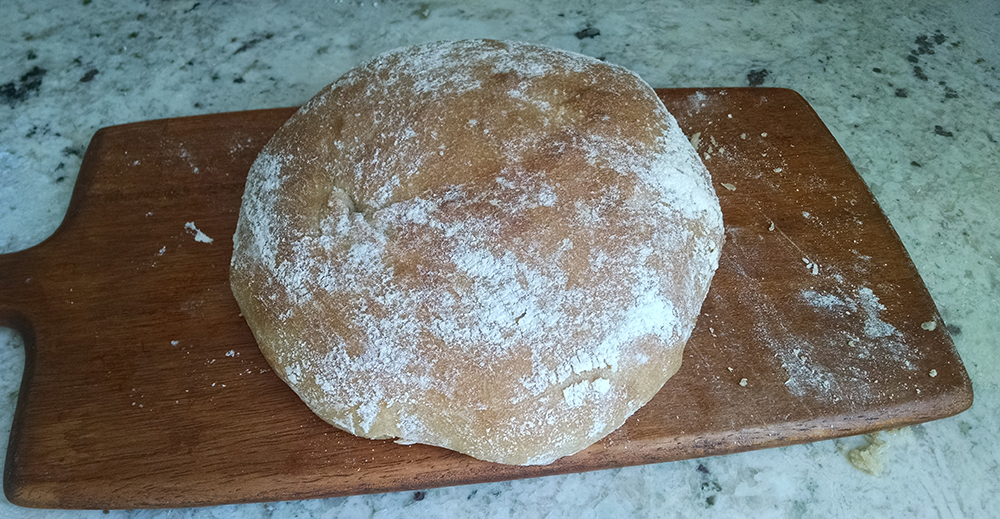 After watching the Netflix documentary Cooked, I decided I wanted to try making leavened bread without commercial yeast. I was fascinated to learn that until the recent creation of commercial yeast all leavened bread was sourdough bread. I learned that sourdough bread is made with wild yeast instead of manufactured from-a-packet yeast. Commercial yeast lets you make light, fluffy bread much faster, which is likely the reason for its rise in popularity. But the convenience of saving time comes at a cost. Much of the nutrition from the wheat flour is not extracted by commercial yeast the way it is by sourdough (according to Cooked, at least—I’m no food scientist or nutritionist—the documentary even speculates that the increase in gluten intolerance may be due, at least in part, to the use of commercial yeasts instead of sourdough). The taste of bread from commercial yeast lacks the richness and complexity of sourdough. A lot of people now prefer the taste (or lack thereof?) of commercial bread, but this is probably an issue of conditioning rather than true preference. Regardless, sourdough bread is awesome, even if it’s not filled with clam chowder.

Turns out there is a bunch of wild yeast all over the place, including in the air and in flour. When flour and water are mixed and left out, they create a nice environment for the yeast to breed and grow. Apparently some bacteria (the good kind) starts growing in there as well, making the mixture smell sour. After about a week, the yeast is strong enough to make dough rise.

The Value of Time

Perhaps one of the best rewards of making sourdough bread, and even sourdough starter, is the delayed gratification. You can save a little bit of time here and there (for instance, some techniques recommend using warm, but not hot, water when feeding the starter), but no matter what the process is going to take about a week. We don’t put nearly enough value on waiting and delayed gratification. I love the internet, but I don’t love how it has glorified instant gratification. While it’s very neat (and economically powerful) that we can communicate instantaneously around the globe, there is something powerful about receiving a handwritten letter several days after it was sent. Sourdough has taught me to better value time, and to patiently wait and watch instead of rushing things to grow1.

One of the surprising trends of late in the software industry is the idea that we can turn novices into expert developers in a matter of weeks by putting them through a “bootcamp.” What is surprising is that this trend is coming from the same industry that created Brooks’ Law, which is most humorously summarized as “nine women can’t make a baby in one month.” Leaders in the industry seem to agree that learning to program takes a long time (Peter Norvig wrote a great article on this subject called Teach Yourself Programming in Ten Years). The value of time in learning a skill, including programming, cannot be overstated. As with gestation and fermentation, some things just take time.

Once the starter is ready, you get to incorporate it into a dough and let it rise. You may note that my loaf did not rise very well. It tasted pretty good (even my kids ate it), but it wasn’t amazing. I made some mistakes, but at least it was good enough that I want to try again. Preparing a loaf of sourdough to bake is a surprisingly intricate process. Here are the things I think I did wrong:

The Value of Practice

While time is important, time alone won’t make better bread (or better programmers, pianists, hockey players, etc.). My first loaf wasn’t a smashing success—I’m not about to go open a bakery. I’m not surprised, though, because it was my first try and it will take some practice (and maybe mentoring) before I figure out how to make a really good loaf of sourdough bread. Practice is in fact the very reason I have been writing so many articles on my blog. Occasionally one of my articles will attract some attention, but for the most part I just write for practice. It takes a lot of concentrated effort to get good at something, it seems. Not even writing a book is enough to ensure you are a good writer.

Hopefully I will get the chance to keep practicing bread making. It’s a fun process, even when the result isn’t amazing.

Note 1: I suspect this lesson could also be learned through gardening, but my thumb is decidedly yellowish-brown, so I wouldn't know for sure.